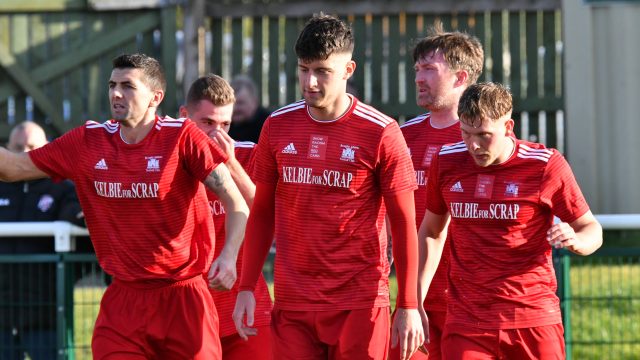 Back to winning ways with home win…

Broughty Athletic were back to winning ways this afternoon following their 2-0 home win against Downfield and moved themselves up to second position in the league with the win.

The Fed started the game with Gregor Anderson captaining the side in defence alongside Kieran Conway. Daryl McKenzie was in the midfield and Josh Skelly started upfront with Bryan Duell. Graham Hay had to be content with a place on the bench following his recent injury.

The first half offered very little from both sides as in chances on goal. The only couple of noticeable ones were Broughty’s Marc Scott tried to lob the visiting keeper on 3mins but it went wide of the post. It took until just past the half-hour mark for another chance, this time a Broughty corner was met by McKenzie in the box but his flick went over the bar. The Fed did, however, break the deadlock. Broughty were awarded a freekick on the edge of the box on 36mins and striker Josh Skelly curled into the top corner of the net, 1-0. Then a minute before the halftime whistle Duell saw his toe-poke go wide of the post, H/T 1-0.

The second half was more livelier than the fost half for sure. On 50mins Scott rattled the post with a close-range effort after he was put through. On 59mins the visitors were reduced to ten men with a second bookable offence meant a red card. The resulting freekick was taken by Duell but easily saved by the keeper. 60mins brought another effort, Skelly’s cross found Scott only to see his volley fly skywards over the crossbar.

65mins Skelly tried his luck from 20yrds out but his effort flew over the bar. But two minutes later Broughty doubled their lead. Substitute Graham Hay fed a ball forward to Ryan Ferguson, he laid it off to Duell and he slipped it past the keeper to make it 2-0. 73mins Hay again passed a long ball forward to Ryan Connelly, he bore down on goal only to see his shot well saved and out for a corner. 80mins Scott tried a shot from the edge of the box but it came to nothing and on 90mins substitute Derryn Kesson saw his shot saved inside the box. F/T 2-0.