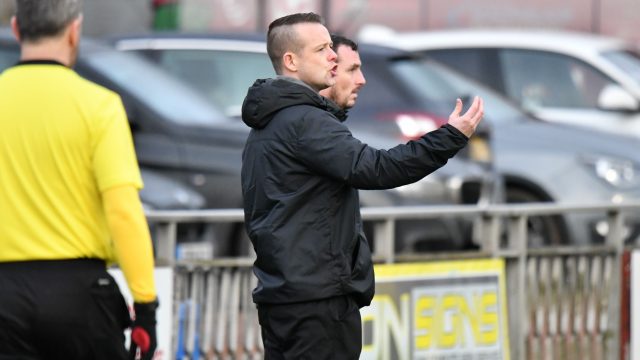 ‘The boys were excellent’ says gaffer…

Broughty Athletic battled back from 2-0 down early on to force a replay in the quarter-finals of the Macron sponsored Scottish Junior Cup on Saturday away to West Region side Darvel Juniors. With time ticking away, and the Fed trailing 2-1, it was left to striker Josh Skelly to rattle home the equaliser to force the replay next Saturday and send the travelling fans and team management into wild celebrations.

“I thought, on the whole, we gave a good account of ourselves on Saturday against Darvel. We came out of the traps really well in the first 10 minutes but if I’m being honest, we lost two very poor goals from our point of view that put us in a bad position away from home. On the flip side, their goalkeeper had three really good saves in the first half after good play in and around the Darvel box that prevented us from getting back into the game. 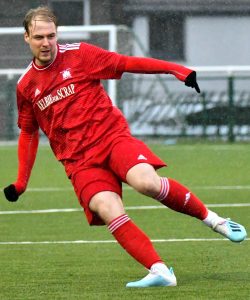 We had words with the boys at halftime and explained if you want to do anything at any level you can’t give the opposition a head start as we did, and if teams are going to score against you then make them at least work for it. As for the second half, I can’t praise them enough for their reaction, to a man they were excellent. They worked so hard in heavy conditions and I’ve said it before, our fitness levels are second to none at this level.

The most pleasing thing for me was the fact we never changed how we played. Despite the heavy park we still played through the lines and supported our forward line with energy from midfield. I think on the balance of play we deserved a draw, however, as time goes on you start to doubt if we had left it too late to get an equaliser as the clock ticked away. Thankfully we managed to get the ball to Josh Skelly (pictured) in the box with time running out and when he spun and got his shot away it flew right into the top corner of the net. That feeling is something that very few things except football can give you and it was great to see everyone celebrating such an important goal.

But, all that counts for nothing if we don’t take care of business next weekend though in the replay at Whitton Park. Both teams have now seen each other at close quarters and it will be a very hard game next weekend between two determined and competitive sides looking to get through to the semi-finals.

I do hope the local community come out and support the boys next Saturday, they deserve it. Anyone that travelled through to Darvel will agree with me that the players gave everything they had on Saturday and I’m sure they will do the same this week, they’ll do whatever is needed…”

As Jamie says, the replay is this Saturday 14th March at Whitton Park with kick-off at 2-30pm. We will bring you our match preview later in the week as we build-up to Saturday’s crunch game…