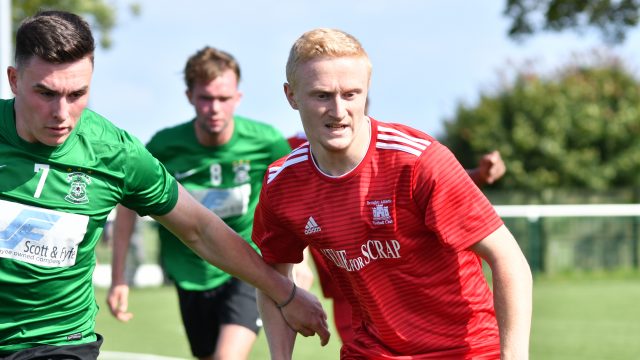 Broughty Athletic are back on Super League business on Saturday when they travel across the river Tay to face Tayport at the Canniepairt.

A fantastic 3-0 win against Cambuslang Rangers last Saturday in the Scottish Junior Cup sees the Fed in fine form and they will look to continue that on Saturday. Whilst the Fed had won in Glasgow, this Saturday’s hosts Tayport also won 2-1 at Kirriemuir in the same competition and go into the hat for the upcoming fifth round draw.

Both sides met back in mid-August at Whitton Park with Broughty grabbing the three points with a 3-0, Marc Scott (main picture above) scoring twice and Bryan Duell netting a 25yrd freekick. Last season both sides won their fixtures at their home grounds, Tayport winning at home 3-2 and Broughty winning at Whitton Park 1-0.

Hosts Tayport currently prop up the Super League table languishing in the bottom position with only two points from eight games played, four games less than the Fed. They have only recorded a draw at home so far this season with four defeats. But these games are always a battle and their luck will change sooner or later and hopefully see them climb the table. They are managed by former Fed keeper, Chris McPherson and have former Fed players Ryan Suttie and Dayle Robertson and former Fed legend Barry Myles in their squad.

Broughty go into the game with still a couple of injury worries but the squad are currently on a great run of form and go into the game full of confidence they can bag the three points on offer.

All fans are reminded this game is a 2-30pm kick-off at Whitton Park.