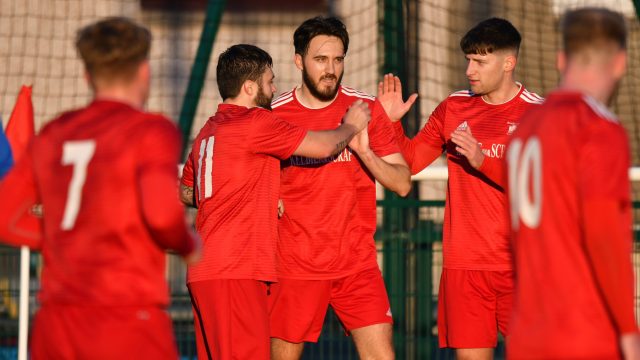 The Fed were without experienced defenders Graham Hay (injured) and Gregor Anderson (suspended) as they went into this game. Back starting eleven came John Roberts in the midfield, Greig McNaughton, Josh Skelly and Jamie Reid.

Broughty looked lively from the off, a far cry from last weeks performance, as they pressed their visitors back for the opening minutes with a couple of corners. 9mins in a striker Josh Skelly tried his luck with a 20yrd effort that went wide of the post. Then on 12mins, the deadlock was broken courtesy of Jamie Reid. He stabbed home a low cross from Brad Smith on the right, 1-0.

20mins in and Skelly tried again, this time a 20yrd free-kick past the post from 20yrds out. 60secs later he tried against for a goal, this time a 25yrd effort over the bar. 27mins and the visitors saw an effort blaze over the bar from the edge of the box. 34mins Skelly again was fed by Ryan Ferguson, he twisted his marker but, his effort was weak and saved easily.

37mins saw the first of many efforts to hit the Blairgowrie goalpost, Brad Smith trying his luck. 39mins and the Fed should have doubled their lead but Greig McNaughton’s effort went wide of the post. 42mins Blairgowrie were awarded a free-kick, it was swung into the box but blazed over the bar and out the park. Then the last chance of the half fell to the Fed, McNaughton tore done the right side, cut a low ball across the box, it was dummied by Skelly but Smith blazed over the bar from 10yrds out. H/T 1-0.

Five minutes into the second half and Smith was on the end of a rash challenge with the visitors receiving only a yellow card. 53mins another effort from Skelly but his shot was saved. 55mins Skelly again was desperate to get on the scoresheet but he missed John Robert’s lob into the box.

56mins Blairgowrie had a great chance to score, but the effort flew across the goal with Sean Diamond beaten. Then on 57mins Broughty doubled their lead with Smith stabbing home, 2-0. Two minutes later the visitors pulled one back when they were awarded a penalty which was converted, 2-1.

64mins Keiron Conway saw his run into the box and header saved from a McNaughton cross. 65mins Ryan Ferguson saw his great play through the middle of the park result in his effort out for a corner. Skelly cut the corner back to an unmarked Ross McCord and his curling effort rattled the post and cleared. 75mins Blairgowrie saw a free-kick skim the wrong side of the post as they pressed for a goal.

78mins Skelly tried to lob the keeper but the ball went wide of the post. 85mins Smith found Skelly and again, this curling effort rattled the post. 86mins Ferguson saw his effort fly over the bar. Within a minute, Skelly had his last effort of the game but sadly no goal came as he curled the ball onto the post again and then cleared.

With three minutes left Smith wrapped up the points with a 20yrd effort into the bottom corner of the net, 3-1 F/T.

A blistering first-half performance from the Fed should have seen them two of three up at halftime. They looked nervous as the visitors pulled one back and looked for the equalizer but Smith wrapped up the well-deserved points in the end.