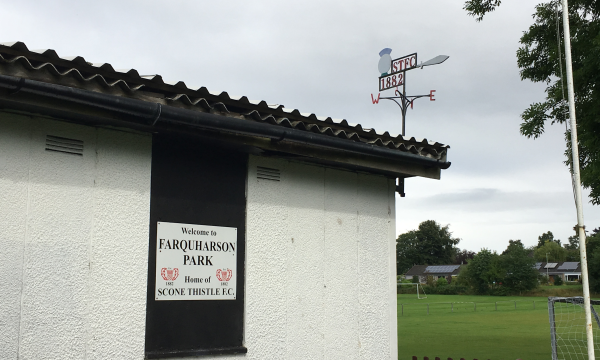 Broughty Athletic make the trip to Farquharson Park this Saturday to face Scone Thistle in the Super League.

The Fed were last in action on 26th October when they were on Scottish Junior Cup duty, defeating Saint Anthony’s FC 5-1 in the third round. Last Saturday’s proposed league game at Carnoustie’s Laing Park was called off due to a water-logged surface.

Hosts Scone, currently sit fifth in the league table, three places behind the Fed and trail by six points but they do have a game in hand. Their last league fixture saw them go down 2-1 against Lochee United at the start of October. Since then they have played Aberdeen East End in the Scottish Junior Cup, with that game drawn 1-1 the resulting replay was another 1-1 draw but they were knocked out after a penalty shoot-out.

The sides first met earlier this season at Whitton Park with the Fed securing all three points with a 3-1 win with Ross McCord and Stewart McConnachie on the scoresheet. The sides never met last season. Fed manager Jamie McCunnie reports he has a near full team to choose from for Saturday’s game with two/three players carrying knocks and they will be checked on prior to the game.

All fans are reminded this game is an earlier kick-off, 2pm, at Farquharson Park, home of Scone Thistle.