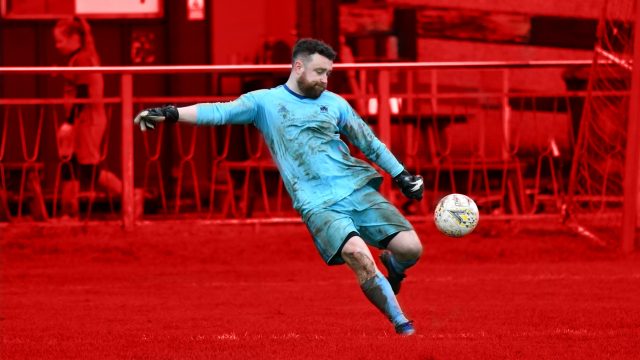 Scone were only at Whitton Park last Saturday and suffered at the hands of their hosts, losing 10-0 in the 3rd round of the Thorntons Property League Cup but no doubt they will be arriving this time far more prepared and ready for the league clash.

The sides have only met once this season in the league, the third game of the season at Whitton Park with the Fed running out 3-1 winners to claim the league points. Scone’s previous three fixtures in all competitions have seen them lose 3-0 to Lochee United in the league, win 3-0 against West Calder United in the East Region Cup and more recently secure a 1-1 draw against Downfield in the league at the start of February.

Broughty goalkeeper Sean Diamond, main picture above, will be looking to keep his third clean sheet in a row come Saturday after keeping two in the previous 10-0 cup win and the 3-0 league win over North End the previous week. So far he has kept five clean sheets in the league, with eighteen games played.

The Fed are once again faced with more injuries as the squad depletes week to week, a comment that has been said for the last few months and there is no sign of it clearing up says gaffer Jamie McCunnie. Saturday’s game, should it go ahead with a storm predicted for the weekend, is the last chance for players to show their worth to book a starting place in the all-important Scottish Cup quarter-final the following Saturday away to West Region Championship league leaders Darvel.

All fans are reminded this game is a 2-30pm kick-off at Whitton Park.