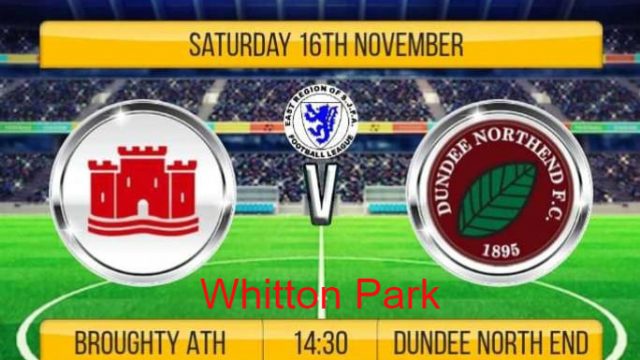 North End have so far been a thorn in the Fed’s side as far as cup competitions are concerned, knocking Broughty out of the Quest Engineering Cup with a 2-0 scoreline and the East Region Cup on penalties so far this season. But the Fed did manage the upper hand in the Super League fixture at North Ed Park, coming away with a 2-1 win and the three points.

North End currently sit fourth position in the league, six points behind the Fed with the same games played and have shown with some of their results they are more than a match for a Super League team on their day. Their last three league results have seen them draw with Downfield and Kirriemuir Thistle and as recent as last Saturday suffer a 4-1 home loss to current league leaders Carnoustie Panmure.

Broughty go into the game not having played for the last couple of Saturday’s due to weather call-offs so manager Jamie McCunnie has had to contend with heavy training sessions to keep players up to speed for this Saturday’s game. There is a couple of players who will face late fitness tests but the gaffer is keeping their names close to his chest as his side look to collect the three points on offer.

All fans are reminded this game is kicking off at 2-30pm and the Whitton Park floodlights will be used should they be needed as the game nears its end.