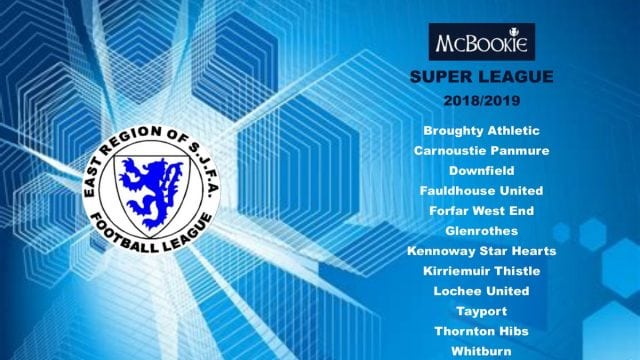 With several clubs deciding to leave the East Region Juniors and step up to ply their trade in the Lowland Leagues, next season’s Super League has been reduced to just twelve teams and listed below are who the Fed will battle it out with to be crowned Super League Champions 2018/19…

Radical changes have come about within the close season which sees the likes of Bonnyrigg Rose, Linlithgow Rose, Bo’ness United, Hill of Beath, Camelon, Penicuik Athletic, Newtongrange Star all leave to take on their new challenge at higher level football in the Lowland Leagues. Everyone at BAJFC wishes all those that have left the ERSJFA good luck in their new quest.

Broughty’s season kicks off on Saturday, August 4th, 2018 at Whitton Park when Fauldhouse United visit with kick off at 2-30pm.

The Fed have also been drawn alongside Coupar Angus and Forfar Albion in Group A of the new look East Region Sectional League Cup competition, with eleven other groups of three teams. Further details of this competition will be released in due course.