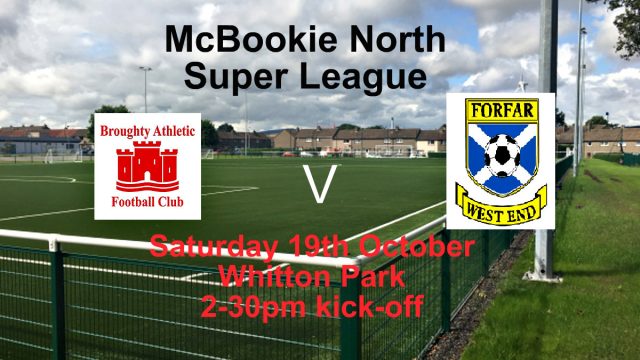 Broughty Athletic welcome Forfar West End to Whitton Park in the league on Saturday and will be looking to build on last Saturday’s 2-0 win over Downfield with another win. It’s a game with an extra twist to it too, other than looking to grab the three points on offer, the Fed’s recent new signing Daryl McKenzie will be up against his former side where he spent many a year as a player and manager of the side and will no doubt be looking to put one over his former side and teammates.

Broughty are currently on a four-game unbeaten run in the league since their last defeat at Lochee United at the end of August, defeating Luncarty 6-3 and Downfield 2-0 and then two drawn games with Luncarty 2-2 and Downfield 1-1, so a win would help strengthen their place in the league, second top spot.

Visitors FWE currently occupy the second bottom spot of the ten-team league, having only won once and drawn three games out of the eight they have played so far compared to Broughty’s ten games and sit twelve points behind. Their latest league result saw them go down 3-1 at Carnoustie Panmure, two weeks after they romped home a 4-0 win at Scone Thistle.

Fed manager Jamie McCunnie welcomes back Ross McCord (pictured) to the squad from injury having missed the last three games, whether he starts the game or starts on the bench will be up to the manager come Saturday. Three other players are carrying knocks and the manager is keeping their names close to his chest with late fitness tests leading up to the game will determine if they start or not.

All fans are reminded Saturday’s fixture is a 2-30pm kick-off at Whitton Park.