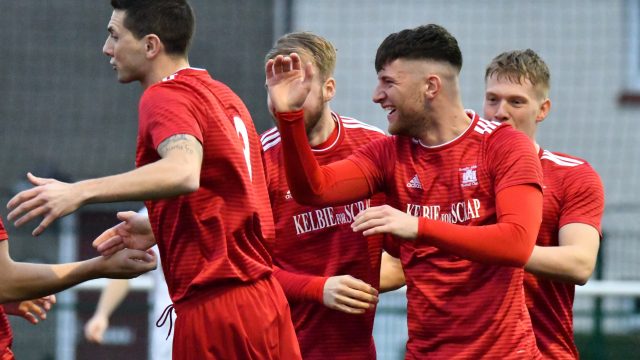 Broughty Athletic brushed their Super League opponents Tayport aside yesterday afternoon at Whitton Park with a fine display of counter-attacking football and solid defending throughout their 6-0 win.

Recent new signing Jamie Reid had to be content with a place on the bench alongside defender Graham Hay. On fire strikers, Josh Skelly and Bryan Duell started upfront and Sean Diamond kept his place in the goal for Broughty.

Things couldn’t have started better for the Fed when Greig McNaughtons’ lob come cross from the corner flag area somehow ended up in the back of the net in the first 60secs from kick-off, 1-0. 6mins on the clock and Skelly tried a shot but it flew over the bar. 8mins and Tayport had their first effort but Diamond saves well. Tayport tried again on 18mins but Diamond tipped the shot over the bar.

The Fed doubled their lead on 25mins when a corner came over, the ball bobbled around and defender Gregor Anderson slammed the ball into the net. 2-0. 27mins another Tayport shot flew over the bar. 33mins on the clock and striker Bryan Duell made it 3-0 with a header from a corner kick. 37mins Derryn Kesson feeds Ryan Ferguson but hos low shot is wide of the post. 40mins and Tayport saw a free-kick saved well at the post by Diamond. Then on 43mins Skelly was brought down in the box, a penalty was awarded, he picked himself up and slammed it home, 4-0 H/T.

Sean Diamond was back in action again on 53mins saving well on his line with the parred effort going wide of the post. 61mins Tayport again tried their luck, this time a goalbound shot was headed clear by substitute Graham Hay when a goal looked certain. Skelly slotted home a penalty on 65mins to make it 5-0 to Broughty. Tayport saw another fine shot saved by the Fed keeper on 68mins. Then on 70mins the goalscoring ended when fine play from Fed winger Marc Scott saw his cross met at the far post by Duell and he slotted it home, 6-0. Substitute Ryan Connelly had two efforts after he came on, one was a shot over the bar and one a miss-kick when a goal looked certain.

Then the final kick of the game fell to the visitors, Keiran Conway gave away a penalty but former Fed striker Dayle Robertson saw his kick skim the wrong side of the goalpost and the scoreline finished 6-0 to Broughty.

A great blistering first-half display saw the Fed well ahead of their visitors. A commanding but slower second half saw them on the back foot as Tayport pressed for a goal. Sean Diamond in Broughty’s goal pulled off some terrific saves to keep them out.