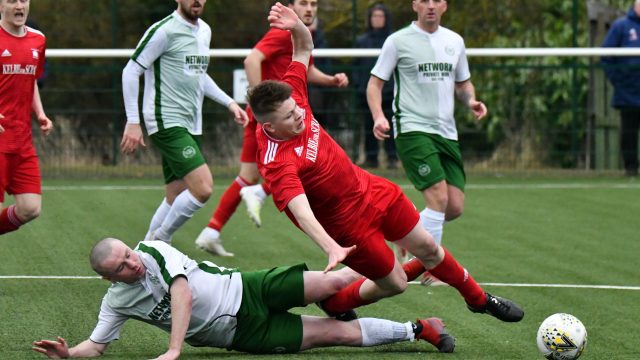 Broughty Athletic welcomed Glasgow based side St Rochs to a blustery Whitton Park this afternoon in the 5th round of the Scottish Junior Cup, with a place in the quarter-finals at stake for both sides.

Broughty were dealt a double blow before the game even kicked off when both captain Graham Hay and striker Josh Skelly pulled out through injury leaving manager Jamie McCunnie to reshuffle a couple of players around to set his team for the day.

It took until the twelfth minute for the first real chance to come along for either side and it turned out to be the opening goal for the home side. Midfielder Ryan Ferguson’s strong run-in on goal with the ball saw his close-range shot strike the arm of the St Rochs defender and a penalty was awarded. Up stepped leading goalscorer, Bryan Duell, to tap home the penalty kick, 1-0. 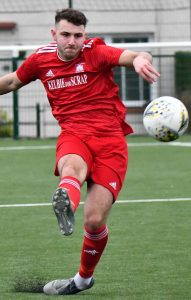 Broughty should have gone on and stepped up a gear but visitors St Rochs grew more into the game and got a deserved equaliser for their efforts albeit from slack defending by Broughty. The Fed’s defence had the chance to clear the ball but somehow they didn’t and the Roch’s striker nipped in at the near post to stab home past Sean Diamond in the goal, 1-1.

The goal lifted them along with the fantastic support that travelled through as they pushed for another no but it was Broughty that had the final say of the half in injury time when Derryn Kesson, on for the injured Ryan Ferguson who had to go off with a hamstring injury, was crashed into and brought down by the Roch’s keeper and another penalty was awarded. Duell stepped up and sent the keeper the wrong way to make it 2-1 at halftime.

The second half was ten minutes old when Roch’s nearly equalised when a long-range effort hit the Broughty bar, bounced down on the line but spun outwards and no goal was correctly given by the match officials much to the disgust of the Roch’s players and supporters. One minute later Kesson was put through one on one with the keeper but was adjudged to be offside. On the hour mark, St Rochs saw a freekick on the edge of the Broughty box cleared. Defender and captain for the day, Gregor Anderson, somehow lunged from nowhere and blocked a goalbound effort too as the visitors looked for a goal.

A Jamie Reid cross from the right on 68mins saw Duell head over the bar when a goal looked certain. No further action of note until the 85th minute when there was a flurry of chances in the dying minutes. Striker Bryan Duell was through one on one with the keeper to beat but was called offside. 86mins visitors Roch’s saw a corner headed just over Diamonds crossbar. 87mins Roch’s tried again, this time a low shot just wide of the far post as they pressed hard for an equaliser.

Then four further glorious chances fell to Broughty, firstly Marc Roberts low shot saved from close range on 88mins, Brad Smith’s effort from the edge of the box was saved by the keeper. On 90mins Duell had another chance but his shot was saved then deep into injury-time Duell again had a great chance for his hat-trick following a St Roch’s misplaced goal kick but that effort was well saved again. F/T 2-1.

Summing up, not a game of much goalmouth chances as in saves for either keeper to make until the later minutes of the game. Broughty controlled the early stages only for St Rochs to come right back into the game and deservedly equalise.

A special mention has to go out to stan-in captain Gregor Anderson. What a performance from him today, won everything in the air and on the ground, threw his body everywhere, blocked everything, fantastic performance.

Another mention for the travelling St Rochs fans who travelled in great numbers for the game. We hope they all had a great day out despite the scoreline and wish them and St Rochs all the very best for the remainder of the season…