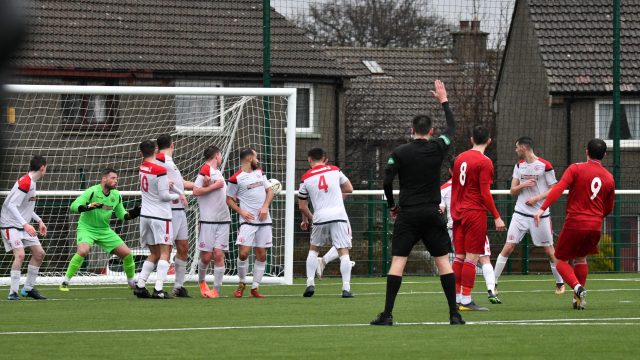 Broughty Athletic went into this game knowing a win would reduce the gap on league leaders Carnoustie as the sides go level on games played so far this season. Whitton Park was deemed the only game playable in the city as Storm Dennis called all others off in the area.

The Fed started with Stuart McConnachie and Bryan Duell upfront, both pictured below, two striker legends of the Junior game, still missing was the injured Ryan Fergusson and Derryn Kesson also missed out through injury. Jamie Reid was on the bench alongside Graham Hay and Josh Skelly.

If games were won on chances not converted then Broughty would have won this game at a canter, just like last Saturday’s 10-0 result. But in the howling wind and rain, it was the home side that ran out comfortable 3-0 winners.

The first chance of the game came on 6mins for the Fed, Brad Smith testing the Scone keeper but he saved his shot well. On 9mins it was the turn of Marc Scott to try his luck but his shot went wide of the post. 11mins and Ross McCord saw his edge of the box free-kick fly over the bar. McCord again saw another free-kick this time saved by the keeper on 22mins.

Scone had their one of very few chances easily saved by Diamond in the goal, a 20yrd effort easily caught. 26mins another free-kick from McCord, this time it was swung into the box but Duell headed wide of the post. 29mins and Scott saw a shot, he’ll want to forget, fly high over the bar and out of the ground! 31mins saw the deadlock finally broken. Stuart McConnachie saw his edge of the box shot saved by the visiting keeper. Whilst preparing to kick the ball up the park the referee saw he had picked the ball up off the ground and so awarded a free-kick to Broughty just inside the 18yrd line. Up stepped Duell to curl a low shot around the wall and into the net, 1-0 (main photo above). Daryl McKenzie thought he doubled Broughty’s lead but his back-post header was saved on the line by the keeper then cleared. Duell again had the final chance of the game but his volley from the edge of the box flew over the bar, H/T 1-0. 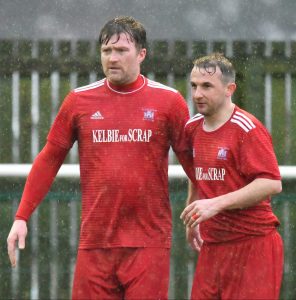 The second half was only four minutes old when McConnachie fed Scott the ball as he bore down on goal only to see his shot saved by the keeper. 53mins and the visitors had a great chance to equalise, a low cross from the left was slashed over the ball from close range. 55mins and another chance for the home side, Greig McNaughton crossed into the box, it was dummied by Duell for the onrushing Scott to blaze over.

62mins saw Broughty double their lead when the Scone keeper snd Duell both went for the ball, it spun off Duell into the path of McConnachie to slam into the net, 2-0. Then three minutes later it was game over, Duell scoring from a tight angle after McConnachie’s shot was partially saved, 3-0.

68mins and Smith tried from 25yrds out but his effort went wide of the post. 70mins and Duell saw his 20yrd effort curl over the bar and out. McCord saw his free-kick head towards goal only for it to hit the back of the onrushing Duell and cleared. McNaughton’s cross was perfect for Duell but he stretched out and could only manage to get a toe to his cross when a goal looked certain on 82mins. Then the final chance of the game came on 83mins, McNaughton’s cross found the head of Duell but as he headed the ball he was brought down by the defender, the nearside assistant referee waved for a penalty but the referee thought otherwise much to the anger of the Broughty forwards. F/T 3-0.

Despite the horrendous conditions, it was a comfortable win for the Fed in the end. Totally dominated the game from start to finish in possession. The only downside to today’s victory was the loss of striker Josh Skelly. He’d only been on the park 10mins as a substitute but had to come off with the same leg injury he’d been recovering from, a massive blow ahead of next Saturday’s cup tie.