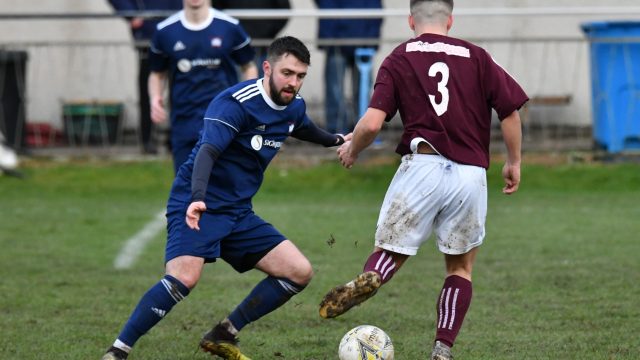 Broughty Athletic went into this afternoon’s Super League fixture away to local side North End knowing only a win would keep them in second spot in the league as the season heads towards the run-in.

Back into the starting side came Ross McCord from suspension and Derryn Kesson. Greig Mcnaughton was on the bench alongside Graham Hay. Josh Skelly was still out injured alongside Ryan Ferguson.

On a soaking wet pitch, the first half-chance of the game fell to the Fed on 4mins with Ross McCord trying his luck with a 25yrd effort but it flew over the bar. With the home side piling on the constant pressure up the other end of the park they were nearly rewarded with a goal but Sean Diamond saved well, punching out for a corner. 20mins Kesson tried a 20yrd effort but the North End keeper saved it with his chest! 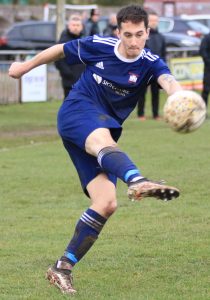 24mins on the clock and North End again were pressing the Fed further back but a cross from the right side was headed wide of the post. Then on 27mins, the home side had a glorious chance to break the deadlock. Keiran Conway easily lost possession, Diamond was rounded by the North End striker but his shot was cleared off the line only for the follow up to be ballooned over the crossbar.

39mins and McCord tried another long-range effort but it went wide of the post. Then just two minutes later the deadlock was finally broken by the visitors. A high ball into the North End box saw their keeper save it with a stretching arm only for the ball to somehow come off him into the path of Jamie Reid and he saw it trickle over the line, 0-1. H/T

The second half was three minutes old when North End saw a low cross into the Fed box shot wide of the post. 58mins defender Greg Warwick (pictured) saw his cross come shot land on the crossbar and out with the keeper panicking. 63mins saw the Fed double their lead with Brad Smith’s left-footed shot settle into the left corner of the goal, 0-2. 64mins Bryan Duell fed Smith down the left but his effort beat the keeper but into the side netting. 68mins saw Smith denied again, this time by the feet of the North End keeper when his shot was goalbound.

72mins Duell saw his edge of the box shot easily saved by the keeper. Three minutes later he tried again but his shot went wide of the post. Then on 77mins Broughty wrapped up the game and three points when Smith was played in on the edge of the box, he somehow flicked the ball with the outside of the left foot and into the net it went, 0-3.

The final chance fell to the home side but their free-kick on the edge of the Broughty box flew past the post and the final whistle went, 0-3 F/T.

Summing up, not the prettiest of football on display due to the heavy soaking pitch but a valuable three points for the Fed against a very stubborn North End side who more than dominated the first half of the game and deserved something to show for it.