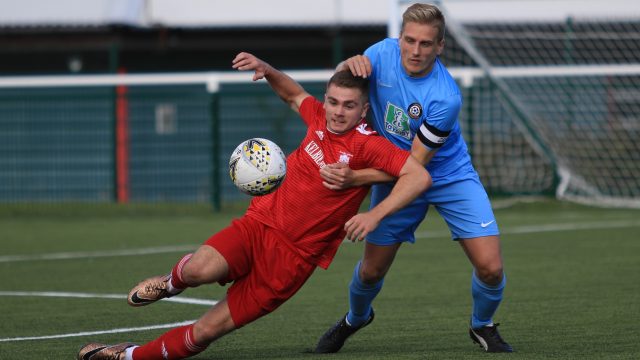 Looking for six in a row this Saturday…

Having narrowly disposed of Kirriemuir Thistle Saturday past with a scoreline of 2-1 to make it five-in-a-row league victories, Broughty Athletic will be looking to make it six-in-a-row when they welcome eighth-placed Luncarty to Whitton Park.

Bryan Duell and a late Derryn Kesson winner sealed the points for the Fed in the 2-1 win and cemented the Fed’s position in second place, still five points behind league leaders Carnoustie Panmure. Manager Jamie McCunnie was delighted and pleased with the win but also with the way how Kirriemuir played and took the Fed to the wire during the 90 minutes. But come this Saturday he will be looking for his side to produce more of the same when Luncarty come calling. 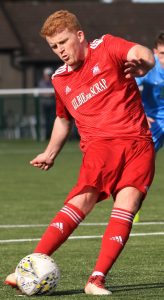 The sides have already met twice this season, Broughty running out convincing 6-3 winners at Whitton Park but held to a 2-2 draw at Brownlands Park early October. The 6-3 victory in early September saw on-loan striker Ryan Connelly (main photo above) net a hat-trick on his Broughty debut alongside Ross McCord netting a brace, one a penalty (pictured left) and Bryan Duell wrapping up the six goals. The 2-2 game saw Broughty come from behind twice with Josh Skelly netting the first equaliser and Greg Warwick slamming home the second equaliser late in the game to grab a point.

Vistors Luncarty currently sit eighth in the league, third-bottom, on 14 points with 15 games played. Their last three league games have seen them lose 4-1 to Tayport last weekend, hold Carnoustie to a 2-2 draw and win 2-1 away to Scone Thistle.

All fans are reminded this game is a 2-30pm with the use of floodlights at Whitton Park.