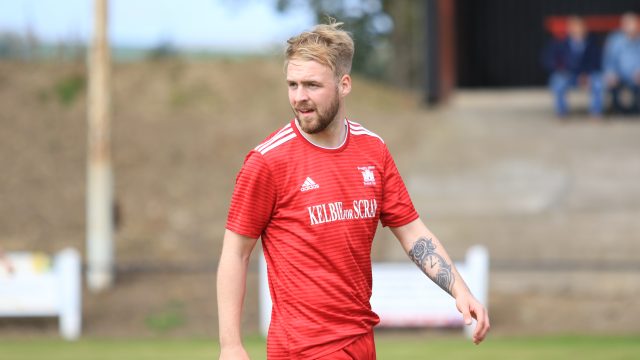 Josh Skelly talks about his return and more…

Broughty Athletic’s recent new signing and former loanee, Josh Skelly, sat down and gave us a little insight into himself since he rejoined the club a couple of weeks ago. Read below what Josh had to say on his return to the club…

Welcome back to the Fed Josh, it’s been a couple of games now so how’s it been since you came back?

Yeah, it’s been good. I’m getting back into the swing of things at the club, I scored on my debut last week and we had a good result in the Scottish Junior Cup on Saturday past. Hopefully, we take that into Saturdays home game and get another win under our belts.

You had a fantastic loan spell at the Fed at the start of the year, finishing top scorer and winning two trophies, how did that feel?

It’s always a good feeling winning trophies no matter what level you are playing at. It was good to win two trophies at Broughty before I headed back at the end of my loan spell. Finishing as the top goalscorer was a bonus too, hopefully, I can replicate that this season despite not being here for the start of the season and see where it takes us.

You started your career with Dundee FC Youth Academy, what age were you and how did that come about?

I was about 16yrs old if I remember right. I had just joined the youths as you do, then I progressed my way through the ranks and managed to get a full-time contract. It was a weird one actually, the team I was playing for, Dundee West, went bust and then I got a phone call the next night asking to go training at Dundee and it just took off from there really.

You’ve played for senior sides Arbroath and Montrose, any special moments that stick out during your time there you care to share with us?

Arbroath winning the Scottish League Two in 2017 was a special moment for me. Being so young and winning a league title was incredible, something you just dream of. The atmosphere on the final day of the season, the whole occasion was all just so special and meant everything to me. Sadly at Montrose, I never managed to have any special moment like at Arbroath but they are a great club with great people and will only progress through time.

Do you have game day rituals or superstitions before a match, if so what are they?

Rituals, superstitions, nah, not really. I do however like to take my son for a walk in the morning before a game, just to get some fresh air, relax and think of what the game will bring. But mainly to give his mum a break before she has to have him the whole day again to allow me to go and play.

Who, in football, is your boyhood hero, someone you admire and why?

Well, everyone has their opinion and I have mine, it’s got to be Barcelona’s, Lionel Messi. He’s a joy to watch, his overall play is just incredible, if I had even one of his many talents on the pitch I would be a happy man, and so would the gaffer!

Do you wish to go back to the senior game eventually, you’re still young and have plenty of time on your hands to do it?

Of course, the step back into the senior game is always in my mind and always my intention. But for now, at this moment in time at Broughty, I want to spend more time with my young son and being at Broughty allows me to do just that.

Training sessions on a cold wet freezing night during the week or losing a game on a Saturday, what’s the worst?

Easy one this, losing on a Saturday by a mile! You put in the graft on a Tuesday and Thursday night building up to the game on Saturday. You don’t attend the cold training sessions during the week for a defeat on Saturdays! A victory makes them nights not near as bad.

Finally, tell us about Josh Skelly outside of football, what do you do, family life, get up to etc?

Outside of football, I’m a family man. I enjoy spending time with my Mrs and son. It’s a special bond that you can’t explain, having a son, it’s the best thing that’s happened to me and I cherish every moment of it. My daily life Monday to Friday, I’m a painter and decorator with Boyle Painters & Decorators based in Dundee so that takes my time up and keeps me busy earning a living. But when I get home if I’m not training I love spending time with the family, you can’t beat it…

Thanks to Josh for his words.