Injured midfielder back in training…

Brad has been out injured since the Fed’s pre-season campaign where they played against a Dundee United select over in St Andrews in their last match of the campaign. Read below what he had to say to our website…

“Well, Brad, how have you been since your injury in pre-season?

I’ve been not bad, just been concentrating a lot on my rehab and looking to get back playing in the team as soon as possible. My recovery time has been better than first expected so I’m feeling happy about that too.

Can you explain what happened in the game for you to get injured and what your injuries were?
I sort of lunged in from behind trying to win the ball just before the final whistle and I landed awkwardly. Once I was at the hospital after all the scans I was told I had dislocated my patella, (kneecap), and my elbow. I also had a small fracture in my radius which is one of the large bones in the forearm.

Have you been watching the games from the sidelines, how do you feel the lads have been getting on?
I’ve been going to as many games as possible. I felt that the first few games they struggled a bit but now have been much better in recent games. Everyones throughout the side is obviously gutted about going out both the East Region and Engineering Cups, both by North End but they’ve reacted well and put in good performances in the league following that.

You have literally just rejoined the squad for training, when do you see yourself back in action in the team?
It was good to get back and involved in training again with the lads, I’ve missed them and I’m sure they’ve all missed me! But for now, it will be non-contact training for 5/6 weeks then after that, I can go back to full-contact training with everyone. My aim is to be back fully fit before Christmas so fingers crossed for that.

How do you think Broughty will get on this season?
Our main aim is to always challenge for the league title and with the squad we have, I feel that it’s definitely achievable if some results can go our way. We need to stay focused throughout the rest of the season and work hard for each other if we want to be up there at the top come the end of the season. Time will only tell…” 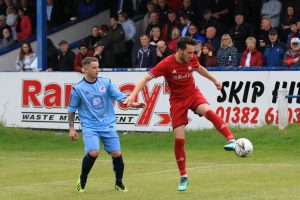 Brad, pictured above, last competitive game for the Fed was at the end of last season, defeating Carnoustie Panmure on penalties in the final of the DJ Laing East Region Cup at the start of June. Everyone at the club welcomes Brad back and wishes him all the best getting back to full fitness and into the team…