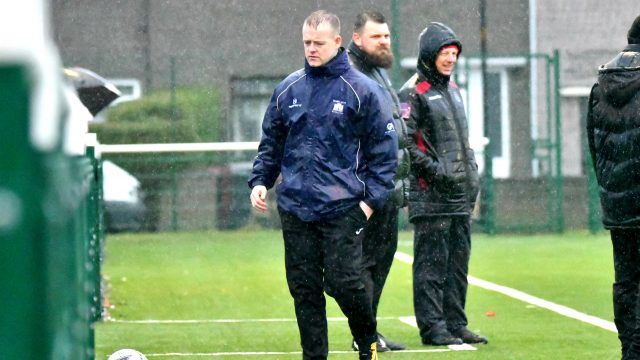 We sat down once again with Fed manager Jamie McCunnie and spoke about the upcoming Scottish Junior Cup quarter-final match away to Ayrshire side Darvel Juniors this Saturday. Read below what he had to say on the game ahead…

So it’s Scottish Cup weekend again this Saturday, what do you know about our opposition, Darvel Juniors?

Darvel are a team that are playing with a lot of confidence just now and sit top of the second tear of junior football in the West region and look like they will be promoted this season to the Premiership. They had a big turnover in players this summer and have a good mixture in their squad with a few boys having previously played in the lower professional leagues. We’ve had them watched twice now so we know we are in for a really tough game especially as it’s away from home.

After knocking out St Rochs in the 5th round, what can Broughty offer as a team to get through to the next stage, the semi-finals?

Well, I think this will be the toughest test we will have faced in the competition so far. We’ve not had an ‘easy’ game yet as we’ve found out against St Rochs, Cambuslang Rangers and Glasgow Perthshire in previous rounds, however, Saturday’s game will undoubtedly be a tougher test so far.
If the boys play to their potential then we are a match for anyone and I mean that. We have some very talented young players at the club and it’s great to see them maturing and developing, that mixed with some of the experienced players we have makes us a dangerous team to play against. We just need to make sure we turn up on the day and give a good account of ourselves. If we do that we will cause Darvel problems for sure.

Yet again, we’ve been troubled by a few injuries the last several weeks in the league campaign but managed to battle on, anyone not making the trip to Ayrshire due to injury etc?

Honestly, we won’t know until the last minute. We have four lads that didn’t play on Saturday, some have a more realistic chance than others if I’m honest. We’ve assessed the squad following training on Tuesday and Thursday nights, they worked hard as normal and we didn’t pick up any new injuries at least. What we don’t do is wrap the boys in up cotton wool and give them an easy weeks training, we only have the boys for three hours or so a week so we work them hard, maintain a great level of fitness and get the most out of the sessions we put on.

How do you prepare the squad for such a massive game in this competition?

We have prepared as we do for every other game, with two sharp training sessions, we keep the boys in good spirits because when your on a good run of form like we are that should be easy enough and then we must make sure when kick-off comes round on Saturday every one of them is as prepared and focused as possible for the game ahead…