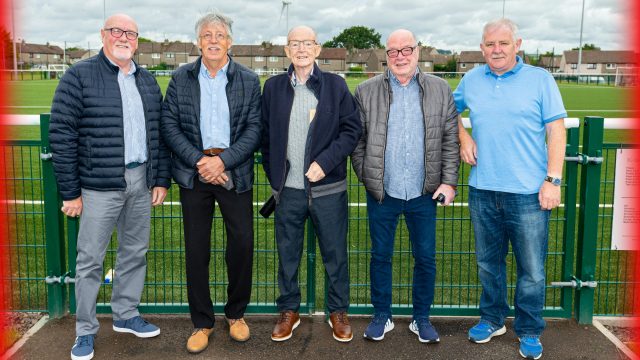 Broughty Athletic JFC were proud to have some visitors recently (pre-covid) for a catch up about days gone by at the home of the club, Whitton Park.

John Brown, pictured left of the photo, played for the Fed from 1971 to 1977. He then went on to manage the team for one season but left rather abruptly! John made his debut aged 15yrs old when he turned up to watch the Fed played Carnoustie but with the Fed being short on numbers Joh was given his chance. He played at right-back against a well known Willie Lawson, formerly of Sheffield Wednesday, and was given a torrid debut on the night. His managerial reign came to an end due to the BAJFC committee arranging a friendly game against Dundee United youth team. JB arrived at the park for what he thought was a training session and his makeshift team were hammered 10-0 and after one more game, he left the club!

David Seeley joined the club in season 1968/69 and our BAJFC Media Team met with David a few months back when the club played their last competitive fixture before the season was ended. David starred for the Fed against Darvel in the Scottish Junior Cup back then, playing in both the original fixture, the first replay then in the 3-0 win in the second replay. 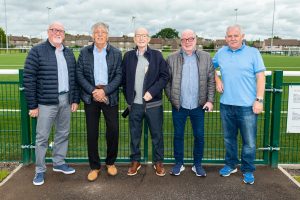 Billy McKenzie played for the Fed between 1967 to 1975 and was captain for seven out of the eight seasons winning several local domestic trophies along the way. His brother, Chris McKenzie at 17yrs old played just the one season for the Fed in 1972 but had a close affinity with the club due to his brothers eight years spent there.

As for BAJFC President Jim Finlayson, it was himself who arranged for the players to get together and chat about old times and reminisce of their times playing for the Fed and to catch up at the new looking Whitton park following the transformation from a grass pitch to the latest 3G surface.

The main picture above shows all the guys pictured together (pre-covid) at Whitton Park.