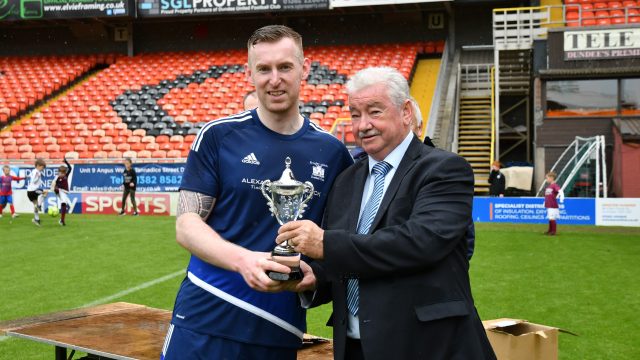 Fed back on cup duty this weekend…

Broughty Athletic take another quick break from Super League business this Saturday when they travel the very short distance to face local side Dundee North End in the first round of the Quest Engineering Cup.

The Fed are fresh off a 6-3 league win against Luncarty Saturday past and know they are in for a tough game once again against North End, whom themselves had a great 3-1 league win over Lochee United on the same Saturday. Two weeks ago the sides met at North End Park in the DJ Laing Cup with the Fed crashing out, as holders of the cup, on penalties so a bit of revenge could be on the cards come this Saturday.

The Quest Engineering Cup as it is known now was previously known as the Signature Signs Cup and Broughty won last seasons final at Tannadice Park 3-0 back in May of this year against this Saturday’s opponents. The main picture above is Broughty’s captain Graham Hay collecting the trophy. The sides have already met in the North Super League this season with Broughty taking the three points home following a narrow 2-1 win.

Broughty welcome back into the squad Derryn Kesson and Gregor Anderson who both missed last weeks game. Loanee striker Ryan Connelly will be looking to keep his goal tally going having scored three on his debut against Luncarty. Manager Jamie McCunnie spoke of the cup tie ahead and had this to say… 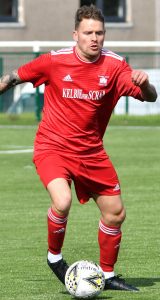 “It’s been a busy week this week for the squad with two good training sessions under their belts. We’ve also been busy behind the scenes too and we are hopefully close to bringing a player in before Saturday.

John Farquharson (pictured left) has left the club and moved to local side Downfield. John joined us last season and I’d like to thank him for his effort while he was with the club, it was frustrating for him as he was cup-tied last season and had not played as much as he would have liked so far this season.”

“On Saturday we play North End for the third time so far this season and the players are probably fed up of the sight of each other. On a serious note though, there’s a lot to play for on Saturday and I’m happy to have a full squad to select from barring a couple of knocks to one or two.

It’s one each so far between the clubs so far and we hope that we can do enough on Saturday to progress to the next round of the cup, a cup we are holders of despite the name change, after a good performance last week…”

Hosts North End will be looking to do the double of domestic cup scalps following their penalty shootout win already over the Fed two weeks ago and will go into the game full of confidence following their great 3-1 league win against Lochee United with North End striker Gary Sutherland grabbing all three goals.

All fans are reminded this game is a 2-30pm kick-off at North End Park. Should the game finish level after ninety minutes then a penalty shootout will determine who enters the hat for the next round of the competition.