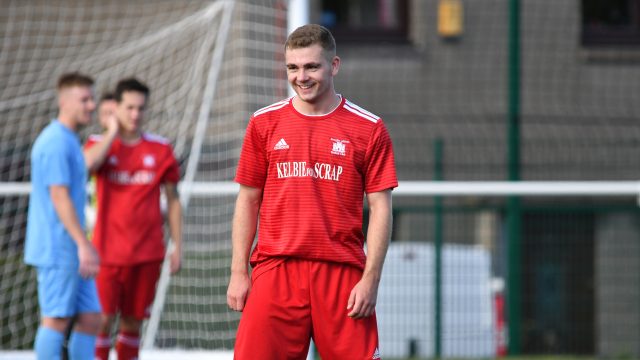 Broughty Athletic’s recent new loan signing Ryan Connelly netted a hat-trick on his debut for his new employers in a nine-goal topsy-turvy game at Whitton Park this afternoon. Both sides held a minutes silence pre-kickoff in respect of Carnoustie Panmure player Ewan Buggins and his family following their recent tragic news.

The Fed went into the game with Bryan Duell back in the starting eleven and Kieran Conway on the bench, both missed last weekends fixture. New signing Ryan Connelly started upfront. 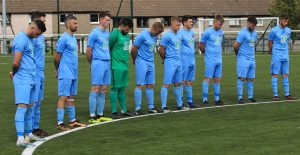 The game was 8mins old when the Fed broke the deadlock, Ross McCord with a 20yrd free-kick in the corner of the net, 1-0. Two minutes later debutant Ryan Connelly forced a good save from the Luncarty keeper after he twisted his marker in and before shooting goalbound. On 18mins Luncarty were on level terms courtesy of a penalty equaliser after Fed keeper Sean Diamond conceded a penalty, 1-1.

21mins on the clock and McCord crossed into the box only to see Duell’s header rebound off the post and out for a corner. A minute later it was Marc Scott’s turns to test the visiting keeper but his effort curled just past the post. Luncarty had a chance to take the lead in the game with a floated free-kick into the box and a diving header only to be finger-tipped saved around the post by Diamond. But on 36mins it was the home side that took the lead, Bryan Duell tapping home from one yard into an empty net following McCord’s low cross into the box, 2-1. Two further chances from Connelly and Duell before halftime could get the Fed further ahead and 2-1 it stayed.

The second half was four minutes old when Luncarty tested Diamond in the Broughty goal but the effort curled past the top corner of the net and out. 53mins and Greig McNaughton fed the ball to Connelly but his shot was deflected over the crossbar for a corner. But on 55mins Connelly finally got the goal he deserved, Ryan Ferguson feeding him the ball and he slotted home 3-1. 64mins and the visitors tried their luck with a header but it flew over the bar with Fed keeper Diamond nowhere near it. Connelly made it 4-1 minutes later when he was played in my Adam McCracken, 4-1.

66mins and Connelly fed the on-rushing Scott the ball, he was through on goal but for a fine save from the Luncarty keepers’ feet. 71mins on the clock and former Fed player James Yates saw his shot deflected over the Broughty bar from long-range. The resulting corner was headed in after it first hit the Broughty crossbar, 4-2. 77mins and Scott was brought down in the box, penalty to the Fed. McCord stepped up and saw his penalty saved by the keeper only for the assistant referee to signal he left his line to early. The retake was slammed home by McCord, 5-2.

The goals hadn’t finished there, Luncarty pulled one back courtesy of an Alassan Jones own-goal, a free-kick swung into the Fed box hit of him and into the net, 5-3. Substitute Stewart McConnachie fed Scott through on 88mins but again he was denied by fine goalkeeping from the Luncarty keeper. Injury time saw Connelly’s strike hit the outside of the post but he had the final say on the game when he twisted turned and slotted home his third goal and Broughty’s sixth of the game after his original effort, a header, came back off the crossbar, 6-3.