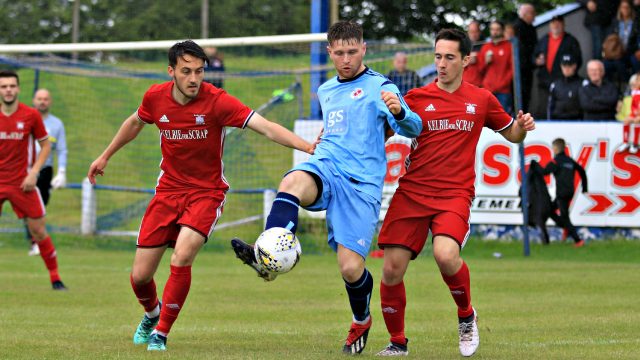 Hosts Carnoustie currently occupy top spot in the league, a position they have been in for roughly the most of the season and it will take a massive effort from the Fed to come away from Laing Park with the three points on offer. They sit four points ahead of Broughty and with a game in hand so it’s doubly important for Broughty to get maximum points. Four home wins and a draw along with four straight away wins sees Carnoustie sit top, a position they deserve, their latest result was a 3-1 home win against Luncarty last weekend.

The sides have already met this season at Whitton Park with the Fed going down 3-1 in their opening fixture on the new 3G surface at Whitton Park. Last season the Fed ran out 5-0 winners at home and 2-1 winners at Laing Park. The sides also met in the East Region Cup final at Lochee’s Thomson Park. Carnoustie pulled back a 2-0 deficit to draw the game and force the sides into a penalty shoot-out which Broughty came out on top to be named champions (photo above of Broughty’s Brad Smith and Greg Warwick either side of Carnoustie’s Pat Martin during the final).

But Saturday’s game will see all previous results put to one side and see two top teams on their day battle it out for the points and bragging rights. There will be an added extra battle thrown in as Broughty will be facing three former players in the current Carnoustie side, namely top playmaker Brian Clark, Jake Mair and Paul Mclellan who all starred and were highly thought of when at Whitton Park.

Broughty go into the game after a heavy win against Saint Anthony’s FC, 5-1, in the Scottish Junior Cup last Saturday and another 5-1 win the week before in the league against Forfar West End so the squad will go in full of confidence they can hopefully come away with something from the game. Manager Jamie McCunnie reports no real concerns with his side following training this week and can pick from a near full squad with only Brad Smith still missing as he is just back on light training following a lengthy injury.

All fans are reminded this game is an earlier kick-off at 2pm down at Laing Park, home of Carnoustie Panmure…