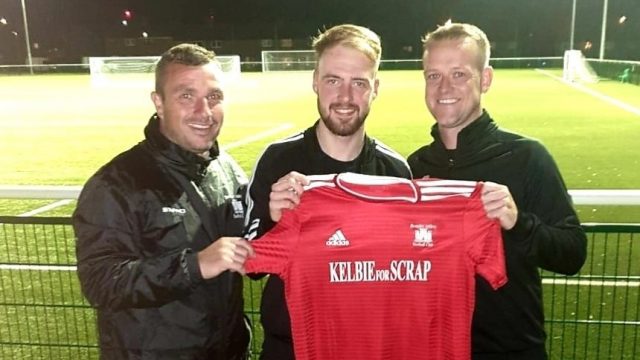 Broughty Athletic have made their second signing in a week with striker Josh Skelly putting pen to paper on a two-year deal at Whitton Park from senior side Montrose FC.

Josh joined on loan at the Fed in January this year and finished top scorer at the end of the season. During his goal spell, he scored the third and final goal in Broughty’s 3-0 win over North End in the Signature Signs Cup at Tannadice Park in May and he scored the opening goal in the 2-2 draw against Carnoustie Panmure in the DJ Laing East Region Cup in June, also scoring the winning penalty in the 4-2 shootout that followed, pictured below, before he returned to his parent club Montrose FC.

“Josh is a great striker and we were pleased to have him last season helping us finish second in the league and win two trophies. To get him back on a permanent two-year deal here at Broughty is a great boost for the club and shows how determined we are to achieve success here.

I must thank Montrose FC for their help in securing Josh’s services and I wish them all the best for the remainder of their season. Josh will rejoin his teammates and goes straight into the squad for our league fixture at Downfield today.”

Josh is pictured above in the main photo with BAJFC assistant manager Ralph Henderson and manager Jamie McCunnie at Whitton Park last night.