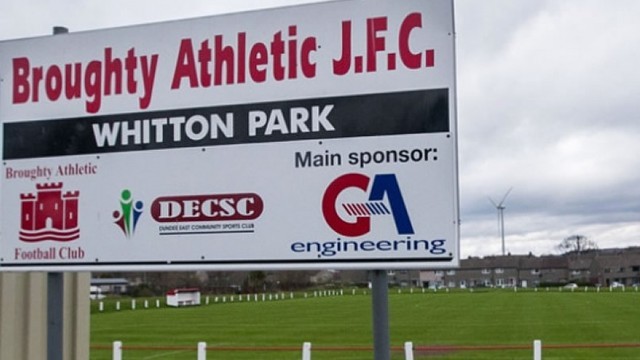 Broughty Athletic were back to winning ways on Saturday as they brushed aside North Division leaders Blairgowrie JFC 5-2 in the first round of the GA Engineering Cup at a rain-soaked Whitton Park.

Rested for the game were first choice goalkeeper Iain Ross, replacing him was John Sinclair, Ross McCord and Brian Clark. Jamie McCunnie started on the bench alongside Grant Lawson.

Two goals in the first half courtesy of Jay Smart and a Paul McLellan penalty had the Fed in control of the game.

Two further goals just before the hour mark in the second half from Matty Adam and Jamie Winter had the Fed 4-0 up before a brief fightback from the visitors, scoring two in a ten minute period, with one a penalty. But as the game entered it’s last several minute’s Broughty manage to miss a penalty, Kerr Hay being the victim. But just before the final whistle, Broughty striker James Collier scored the fifth and final goal for the home side.

Another positive from the game was the introduction of long-term absentee Grant Lawson who had been missing trough injury all season, who came on as a substitute just after the hour mark.

Broughty are back on cup duty next Saturday as they travel to face Johnstone Burgh in the second round of the Scottish Cup.