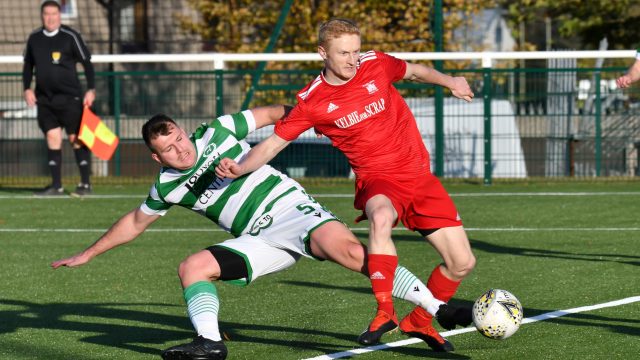 Another five goals as Broughty progress…

Broughty pressed from the opening whistle and their first-half chance came on 4mins but the cross into the Saints box was easily cleared. 8mins saw striker Bryan Duell see his header go wide of the post from a Graham Hay cross into the box. 16mins and Josh Skelly tried his luck, a curler flying past the outside of the post.

The deadlock was finally broken and it was the home side that went ahead, Duell prodding home from a Marc Scott low cross into the 6yrd box, 1-0. The lead only lasted four minutes as Saint Anthonys were level on 21mins. A long ball wasn’t cleared by Ryan Ferguson and his man slipped him and slammed the ball past Brodie in the goal, 1-1.

Just on the half-hour mark Broughty had another chance, Ferguson’s low cross found Skelly, he laid it up for Daryl McKenzie but his shot flew high, wide and into the sky. Broughty grabbed their second on 36mins. He was fed the ball on the edge of the box and his shot flew into the net with the keeper beaten, 2-1. The final chance came on the halftime whistle, Broughty screamed for a penalty as Ryan Connelly was fouled in the box only for the referee to book him for diving! H/T 2-1.

In the second half, it took until the hour mark for the Fed to extend their lead. A mistake between the Saints keeper and defender saw Connelly unselfishly square it for Duell to slam home, 3-1. 60secs late Connelly tried his luck on the right with a shot but the keeper saved well. 66mins Marc Scott flew down the left side but saw his effort fly wide of the post.

67mins and Josh Skelly booked Broughty’s place in the next round draw with a superb left-foot shot from outside the box and it flew into the net, 4-1. Saints did have an effort on 72mins but from long-range and it flew over the bar and out of the ground. 73mins and Broughty scored their fifth and final goal courtesy of Ross McCord. Scott ran on goal, then the ball eventually found it’s a way to McCord and he curled the ball high into the top corner of the net, 5-1.