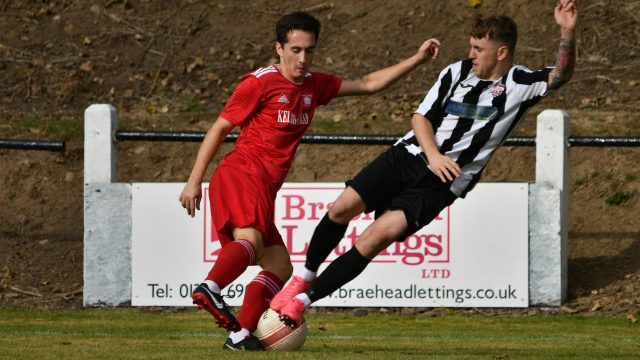 A point a piece following draw…

Broughty Athletic came away with just a point in yesterday’s Super League fixture following a wonder strike equaliser for the home side, Downfield.

The Fed went into the game missing Gary Fraser and Ross McCord but welcomed back striker Josh Skelly after he put pen to paper on a two-year deal with the Whitton Park side with the paperwork just coming through Saturday morning. Alassan Jones started on the bench and Stuart McConnachie was on from the start alongside Daryl McKenzie.

8mins on the clock and Josh Skelly was in the mood for his first goal but saw his 20yrd effort fly over the bar. On 11mins Downfield managed to hit the Fed’s crossbar with a long-range effort. Another effort from the home side, a 25yrd strike, was tipped over the bar by Broughty’s Sean Diamond in the goal. 26mins and Skelly tried his luck again but his low strike in the box was well saved. 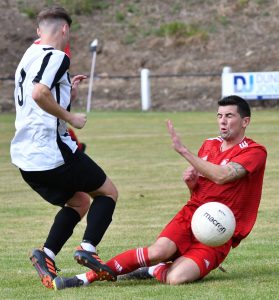 That man Skelly again, this time on 29mins, his 25yrd effort flew wide of the post. On 32mins Broughty were close to taking the lead, a low cross from the right was deflected onto the Downfield crossbar with the keeper beaten and out for a corner. 37mins Greig McNaughton saw his cross from the right met by the head of McConnachie but there was no power in the header and it was saved and cleared. On 41mins the deadlock was finally broken. Josh Skelly collected the ball on the right, cut into the box but was brought down by the defender by pushing him and a penalty was given. He stepped up and slammed it home, 0-1.

The second half was a minute old when Downfield almost scored, a shot from the left was saved and the ball flew past Diamond’s goal and out. 48mins a Skelly corner was met by McConnachie but his effort was cleared off the line. Minutes later Downfield tried a 40yrd lob but the ball went wide of the goal. 56mins Ryan Connelly stole the ball, twisted inside the box but his low curled effort went past the post. On 62mins Gregor Anderson went to clear the ball on the halfway line only to see it fly towards the Downfield goal and skim the crossbar.

The home side finally got their deserved equaliser, a wonder strike from long-range on 63mins, 1-1. 68mins Derryn Kesson saw his effort punched away by the keeper. Broughty were pushing for the winner and Skelly’s floated free-kick into the box was well saved. 84mins Skelly again tried, a 25yrd effort flew over the bar. 85mins Kesson again, twisted inside the box but his low shot went wide. The final effort for the Fed fell to Skelly again but the goalbound shot was blocked and cleared.

The home side had the final chance of the game, it fell to former Fed striker Kerr Hay, he ran goalwards one on one with the Fed keeper but his effort was saved then finally cleared. F/T 1-1.